We had dropped anchor waiting for the pilot, as per instructions. To pick up the anchor on Kapowai it is normal to start the wing engine, and increase to 1500 RPM in neutral to provide enough power to run the hydraulics, the main engine is usually at idle and does not provide enough hydraulic pressure to run the windlass under load. Both main and wing engines can drive a hydraulic pump off a PTO.

Once we left the anchorage the wing engine was brought to idle for the short trip to the locks. I would normally stop it and re-start but it was such a short trip it seemed better to leave it at idle.

As we got close to the locks the Pilot wanted to transfer to the fly-bridge which we did, as I left the pilot-house I put the wing engine back to 1500 RPM.

As we got closer the Pilot was saying slow down but even with the main engine in neutral we were still doing 3 knots and closing all the time on the Polar Stream. The Pilot was getting concerned and started all sorts of instructions and questions.

Not sure what was happening I started a round turn, with the main engine in neutral.

Here we are approaching: 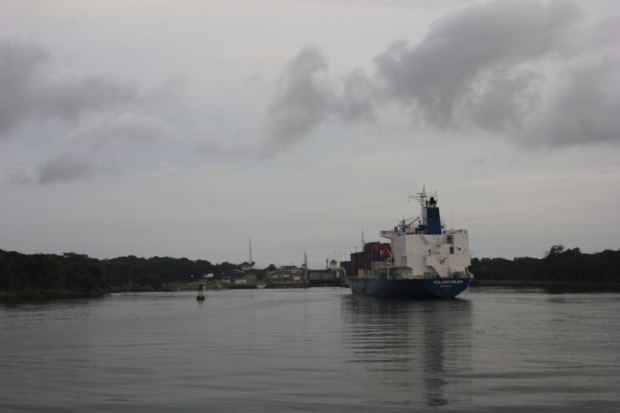 And a bit later still:

as we did this I realised that it was the wing engine, clutched in ahead, that was causing the problem.

Wing engine back to idle, push in button, build RPM in neutral and boat back to normal. Screams from deck crew stop.