As we were early we passed the city and cruised up the Hudson River. 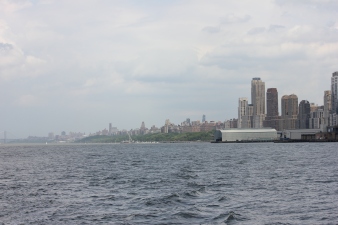 Underneath the George Washington bridge is this little red lighthouse. It was destined for demolition after the bridge was built but a publicity campaign supported by a best selling children’s book saved the day.

We only went 30 miles up the Hudson, if we had kept going we would have ended up in Canada.

This photo will give some idea of how big it is: